The geologic record is exactly that: a record. The strata of rock tell scientists about past environments, much like pages in an encyclopedia. Except this reference book has more pages missing than it has remaining. So geologists are tasked not only with understanding what is there, but also with figuring out what’s not, and where it went.

One omission in particular has puzzled scientists for well over a century. First noticed by John Wesley Powell in 1869 in the layers of the Grand Canyon, the Great Unconformity, as it’s known, accounts for more than one billion years of missing rock in certain places.

Scientists have developed several hypotheses to explain how, and when, this staggering amount of material may have been eroded. Now, UC Santa Barbara geologist Francis Macdonald and his colleagues at the University of Colorado, Boulder and at Colorado College believe they may have ruled out one of the more popular of these. Their study appears in the Proceedings of the National Academy of Sciences.

“There are unconformities all through the rock record,” explained Macdonald, a professor in the Department of Earth Science. “Unconformities are just gaps in time within the rock record. This one’s called the Great Unconformity because it was thought to be a particularly large gap, maybe a global gap.”

A leading thought is that glaciers scoured away kilometers of rock around 720 to 635 million years ago, during a time known as Snowball Earth, when the planet was completely covered by ice. This hypothesis even has the benefit of helping to explain the rapid emergence of complex organisms shortly thereafter, in the Cambrian explosion, since all this eroded material could have seeded the oceans with tremendous amounts of nutrients.

Macdonald was skeptical of this reasoning. Although analogues of the Great Unconformity appear throughout the world – with similar amounts of rock missing from similar stretches of time – they don’t line up perfectly. This casts doubt as to whether they were truly eroded by a global event like Snowball Earth.

Part of the challenge of investigating the Great Unconformity is that it happened so long ago, and the Earth is a messy system. “These rocks have been buried and eroded multiple times through their history,” Macdonald said.

Fortunately, the team was able to test this hypothesis using a technique called thermochronology. A few kilometers below the Earth’s surface, the temperature begins to rise as you get closer to the planet’s hot mantle. This creates a temperature gradient of roughly 50 degrees Celsius for every kilometer of depth. And this temperature regime can become imprinted in certain minerals.

As certain radioactive elements in rocks break down, Helium-4 is produced. In fact helium is constantly being generated, but the fraction retained in different minerals is a function of temperature. As a result, scientists can use the ratio of helium to thorium and uranium in certain minerals as a paleo-thermometer. This phenomenon enabled Macdonald and his coauthors to track how rock moved in the crust as it was buried and eroded through the ages.

“These unconformities are forming again and again through tectonic processes,” Macdonald said. “What’s really new is we can now access this much older history.”

The team took samples from granite just below the boundary of the Great Unconformity at Pikes Peak in Colorado. They extracted grains of a particularly resilient mineral, zircon, from the stone and analyzed the radio nucleotides of helium contained inside. The technique revealed that several kilometers of rock had been eroded from above this granite between 1,000 and 720 million years ago.

Importantly, this stretch of time definitively came before the Snowball Earth episodes. In fact, it lines up much better with the periods in which the supercontinent Rodinia was forming and breaking apart. This offers a clue to the processes that may have stricken these years from the geologic record.

“The basic hypothesis is that this large-scale erosion was driven by the formation and separation of supercontinents,” Macdonald said.

The Earth’s cycle of supercontinent formation and separation uplifts and erodes incredible extents of rock over long periods of time. And because supercontinent processes, by definition, involve a lot of land, their effects can appear fairly synchronous across the geologic record.

However, these processes don’t happen simultaneously, as they would in a global event like Snowball Earth. “It’s a messy process,” Macdonald said. “There are differences, and now we have the ability to perhaps resolve those differences and pull that record out.”

While Macdonald’s results are consistent with a tectonic origin for these great unconformities, they don’t end the debate. Geologists will need to complement this work with similar studies in other regions of the world in order to better constrain these events.

The mystery of the Great Unconformity is inherently tied to two of geology’s other great enigmas: the rise and fall of Snowball Earth and the sudden emergence of complex life in the Ediacaran and Cambrian. Progress in any one could help researchers finally crack the lot.

“The Cambrian explosion was Darwin’s dilemma,” Macdonald remarked. “This is a 200-year old question. If we can solve that, we would definitely be rock stars.”

Explore The Early Earth at TerraDaily.com 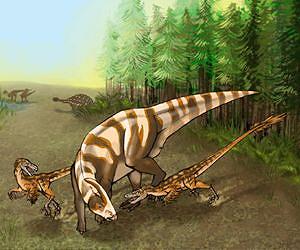 Unlike Jurassic Park, real raptors may not have hunted in packs