Here at Hackaday, we’re always enthralled by cool biohacks and sensor development that enable us to better study and analyze the human body. We often find ourselves perusing Google Scholar and PubMed to find the coolest projects even if it means going back in time a year or two. It was one of those scholarly excursions that brought us to this nifty smart bandage for monitoring wound healing by the engineers of FlexiLab at Purdue University. The device uses an omniphobic (hydrophobic and oleophobic) paper-based substrate coupled with an onboard impedance analyzer (AD5933), an electrochemical sensor (the same type of sensor in glucometers) for measuring uric acid and pH (LMP91000), and a 2.4 GHz antenna for wirelessly transmitting the data (nRF24L01). All this is programmed with an Arduino Nano. They even released their source code. 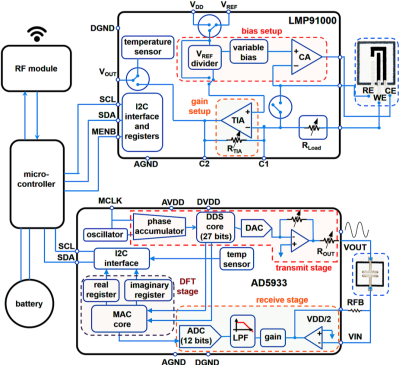 To detect uric acid, they used the enzyme uricase, which is very specific to uric acid and exhibits low cross-reactivity with other compounds. They drop cast uric acid onto a silver/silver chloride electrode printed on the omniphobic paper. Similarly, to detect pH, they drop cast a pH-responsive polymer called polyaniline emeraldine salt (PANI-ES) between two separate silver/silver chloride electrodes. All that was left was to attach the electrodes to the LMP91000, do a bit of programming, and there they were with their own electrochemical sensor. The impedance analyzer was a bit simpler to develop, simply attaching un-modified electrodes to the AD5933 and placing the electrodes on the wound.

The authors noted that the device uses a much simpler manufacturing process compared to smart bandages published by other academics, being compatible with large-scale manufacturing techniques such as roll-to-roll printing. Overcoming manufacturing hurdles is a critical step in getting your idea into the hands of consumers. Though they have a long way to go, FlexiLab appears to be on the right track. We’ll check back in every so often to see what they’re up to.

Until then, take a look at some other electric bandage projects on Hackaday or even make your own electrochemical sensor.

Starwatch: the moon pays a spring visit to Virgo | Science

New Bionic Eye Might See Better Than We Do