Grey Alien Games have been producing casual-style games for more than a decade using solitaire as the foundation. Their previous game Shadowhand marked a move into a more challenging design by combining RPG systems and a unique battle system. Continuing with that design, Ancient Enemy streamlines the design to give us the current best implementation of this design.

The story involves a mysterious mage waking up to find that the land has been corrupted and strange creatures now roam around. Your mission is to get through each chapter of the game by completing solitaire challenges to gain resources and items that you can use for the battles.

The solitaire levels are like Grey Alien’s previous games: as you try to clear the randomized board of all the cards.

For those that played Shadowhand, the combat system returns with some refinements. Here’s a primer for those that missed it. You’re still clearing a field of cards using the same solitaire rules as before, but the different suits will charge up abilities corresponding to attack, magic, or defense options. Your turn ends when you either run out of cards to take, you use an item, or perform one of your actions. After which the AI will either perform one of their actions or build up a charge to use it in a later turn.

Both the normal and battle solitaire matches rate you on a scale of one to three stars in terms of our well you performed. If you are looking for what’s new with Ancient Enemy, there have been several changes to make things easier to process.

Shadow Hand may not have looked it, but was a very complicated game thanks to the equipment synergies and overall difficulty. With Ancient Enemy, a lot has been done to make things easier for players and changing up Grey Alien’s formula.

The biggest departure is the removal of chapter goals. In previous games, you had to achieve all the goals over the set of matches in a chapter for that chapter to be considered won. You could essentially beat every encounter, but if you didn’t meet the conditions, you would have to replay the whole thing. Now, all you must do is beat the boss of a chapter for it to be considered complete.

The variety of builds and items have also been toned down considerably. You only have one default attack, but you can choose from different spells, ability, and defense cards: alongside three items. Defense is very important in the game, with each card providing different utility and defenses to certain attacks. If you take the wrong defense card, you will not be able to mitigate damage during that fight. Consumable items are vital in terms of providing buffs, debuffs, and that little extra damage needed for the game’s harder fights. After every chapter, you can level up and choose a unique passive to help create a build for you. 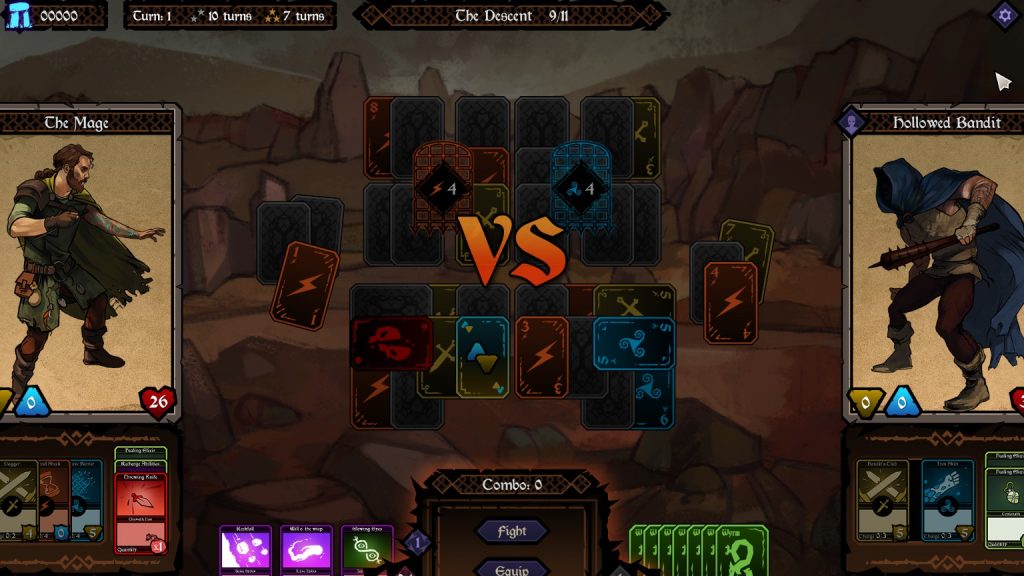 making use of specialty cards is still crucial

While the game doesn’t approach the depth of customization seen in full-scale RPGs, the streamlined approach should do a lot to smooth out the difficulty curve seen in Shadowhand.

Ancient Enemy is a game that knows what it wants to be, and doesn’t leave me with a lot of critical design issues to talk about.

If you were hoping for more complexity from Shadowhand’s formula, Ancient Enemy may be disappointing for you. I found it to be easier than Shadowhand, while playing the game on nightmare difficulty. Using a build with temporal magic, it carried me all the way to the end; something that wouldn’t be possible with the more fiddly-minded Shadowhand.

In terms of the actual card mechanics/battles, I liked the streamlined approach with choosing cards of each type. The only thing that felt like it was missing was having different physical attacks, which I asked Jake about and he said this was a streamlining decision.

RNG of the cards drawn and what’s on the table can still cause you trouble, and why there is a focus on what items and specialty cards to take in before a fight. You are going to have to resist the temptation to hoard items in Ancient Enemy, as most status-effects are set to the consumable items.

Ancient Enemy is, now, the most realized take on Jake’s design. If you enjoyed his previous games but were put off by the difficulty spikes of Shadowhand, Ancient Enemy is easier to get into. I would suggest for new players to play through Ancient Enemy first, and if you want more depth and difficulty, then try Shadowhand.

From here, I’m curious to see where Jake takes this design further or will he experiment with a new gameplay loop. While not for everyone, Ancient Enemy stands at an interesting point between a casual design with challenging mechanics.

If you enjoyed my post, consider joining the Game-Wisdom discord channel open to everyone.

NASA Is Set To Launch Astronauts Aboard A SpaceX Spacecraft