The Downlink: Weekly resources to fuel your love of space 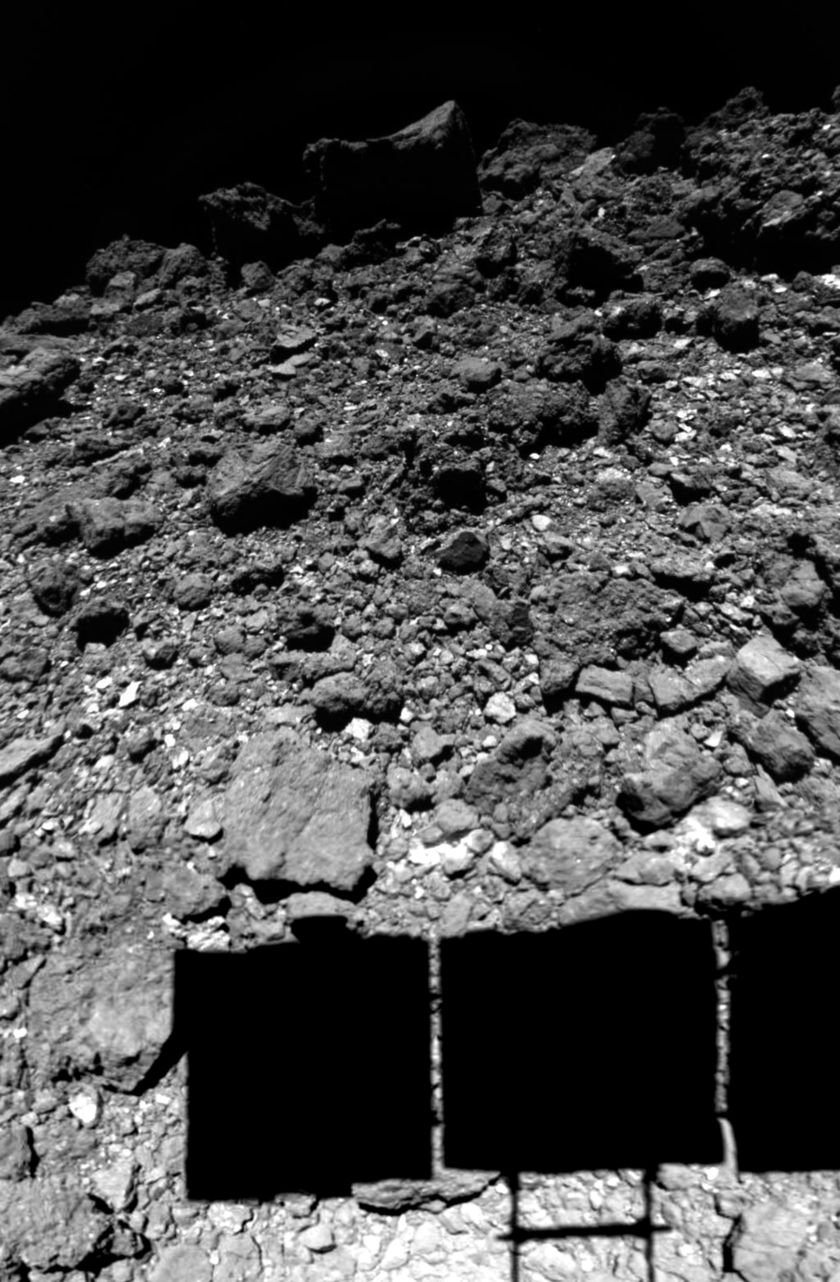 Japan’s Hayabusa2 spacecraft sees the shadow from its solar arrays as it prepares to collect a sample from the surface of asteroid Ryugu on 22 February 2019.

This weekly newsletter is your toolkit to learn more about space, share information with your friends and family, and take direct action to support exploration. Anyone can subscribe at planetary.org/connect to receive it as a weekly email.

The Apollo missions collectively brought back almost 4 million times more material from the Moon than the 100 milligrams JAXA’s Hayabusa2 mission hopes to bring back from asteroid Ryugu. Still, scientists can learn a huge amount from such a tiny sample. 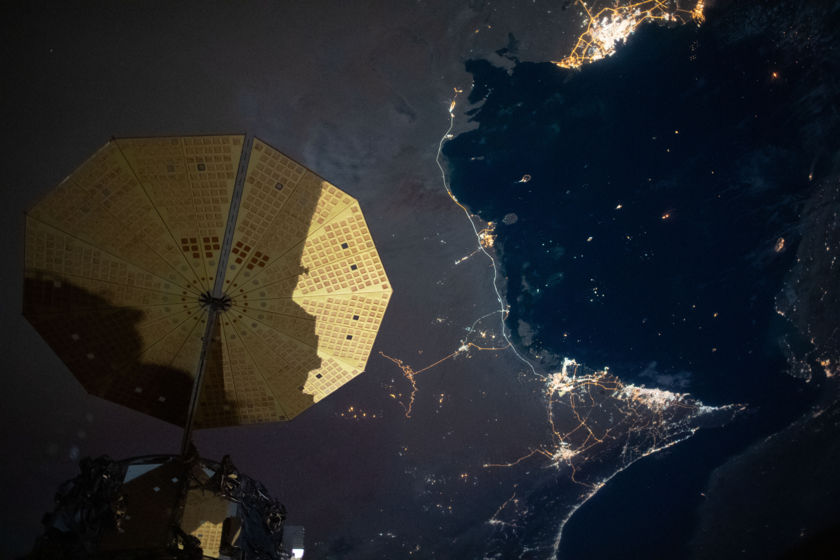 City lights on the Persian Gulf

This nighttime image from the International Space Station shows the Persian Gulf city of Doha, Qatar (top right) and the United Arab Emirates cities (bottom right) of Abu Dhabi, Dubai and Ali Ain. In the foreground is a cymbal-shaped solar array attached to a Cygnus cargo spacecraft.

An uncrewed Cygnus cargo ship left the International Space Station after a 3-month stay. The trash-filled spacecraft will guide itself into Earth’s atmosphere later this month for destructive reentry. Ground controllers were expected to trigger a small, contained fire inside the spacecraft shortly after it left as part of ongoing space fire safety research. Cygnus is also scheduled to deploy CubeSats before its mission ends.

NASA’s Juno spacecraft has teamed up with the Hubble Space Telescope and the ground-based Gemini Observatory in Hawaii to study storm systems on Jupiter. Data show that storms on the gas giant can tower more than 64 kilometers (40 miles) from top to bottom, producing lightning 3 times more energetic than that on Earth.

A group of scientists says they have found new evidence in 20-year-old data from NASA’s Galileo spacecraft indicating Galileo flew through a plume of water vapor erupting from Jupiter’s moon Europa. Scientists have had mixed results over the years trying to figure out just how much water erupts into space from the moon’s subsurface ocean. NASA’s Europa Clipper spacecraft will investigate the chemical makeup of Europa’s ocean in order to determine whether life as we know it could exist there.

Want to know where you can land your Moon mission safely, and have convenient access to natural resources like water ice? Planetary scientist Kevin Cannon has published a comprehensive set of maps and other data showing, among other things, what lurks in permanently shadowed regions near the Moon’s north and south poles. To learn more about why and how we study the Moon, visit planetary.org/moon.

From The Planetary Society 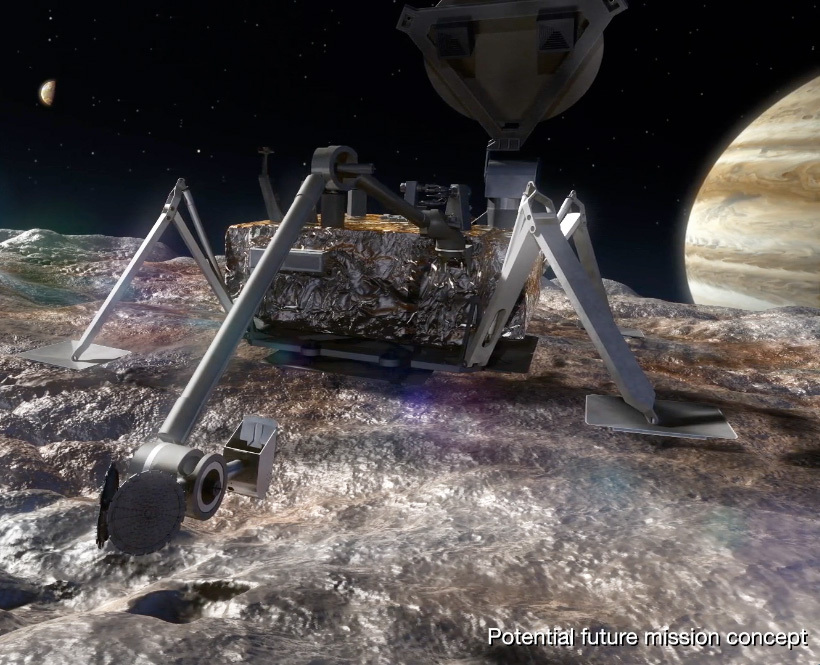 Europa Lander is a concept for a potential future mission that would look for signs of life in the icy surface material of Jupiter’s moon Europa.

The Earth’s oceans hold a great deal of mystery in their watery depths, but that’s nothing compared to the mystique of alien oceans. The latest episode of Planetary Radio takes you on an exploration of extraterrestrial oceans with NASA astrobiologist Kevin Hand, looking at the potential for life in the seas of Europa and other fascinating worlds. Pictured: An artist’s concept of the Europa Lander, a potential future mission that would look for signs of life in the icy surface material of Jupiter’s moon Europa.

This coming week, Venus and Mercury will be very close together low to the Western horizon after sunset. Before dawn, you’ll be able to spot Mars, Jupiter, and Saturn, while Neptune can be seen with binoculars or a telescope.

Wow of the Week

If you’ve ever dreamed of being an astronaut, you’ll want to try SpaceX’s Crew Dragon docking simulator. This free game lets you work with the same control interface that NASA astronauts use to manually pilot Crew Dragon. Ordinarily, dockings with the International Space Station are automated, but the astronauts can take manual control if needed.

If you’ve ever dreamed of being an astronaut, you’ll want to try SpaceX’s Crew Dragon docking simulator. This free game lets you work with the same control interface that NASA astronauts use to manually pilot Crew Dragon. Ordinarily, dockings with the International Space Station are automated, but the astronauts can take manual control if needed.

Do you have a suggestion for the Wow of the Week? We’re looking for space-related art, music, gadgets, quotes, fashion, burning questions, brief sci-fi passages, or anything else that will make our readers go “Wow!” Send us your idea by replying to this email, and please let us know if you’re a Planetary Society member.

Become a member of The Planetary Society and together we will create the future of space exploration.

Video Friday: This Robot Wants to Talk to You

Week in Review: Most popular stories on GeekWire for the week of May 17, 2020