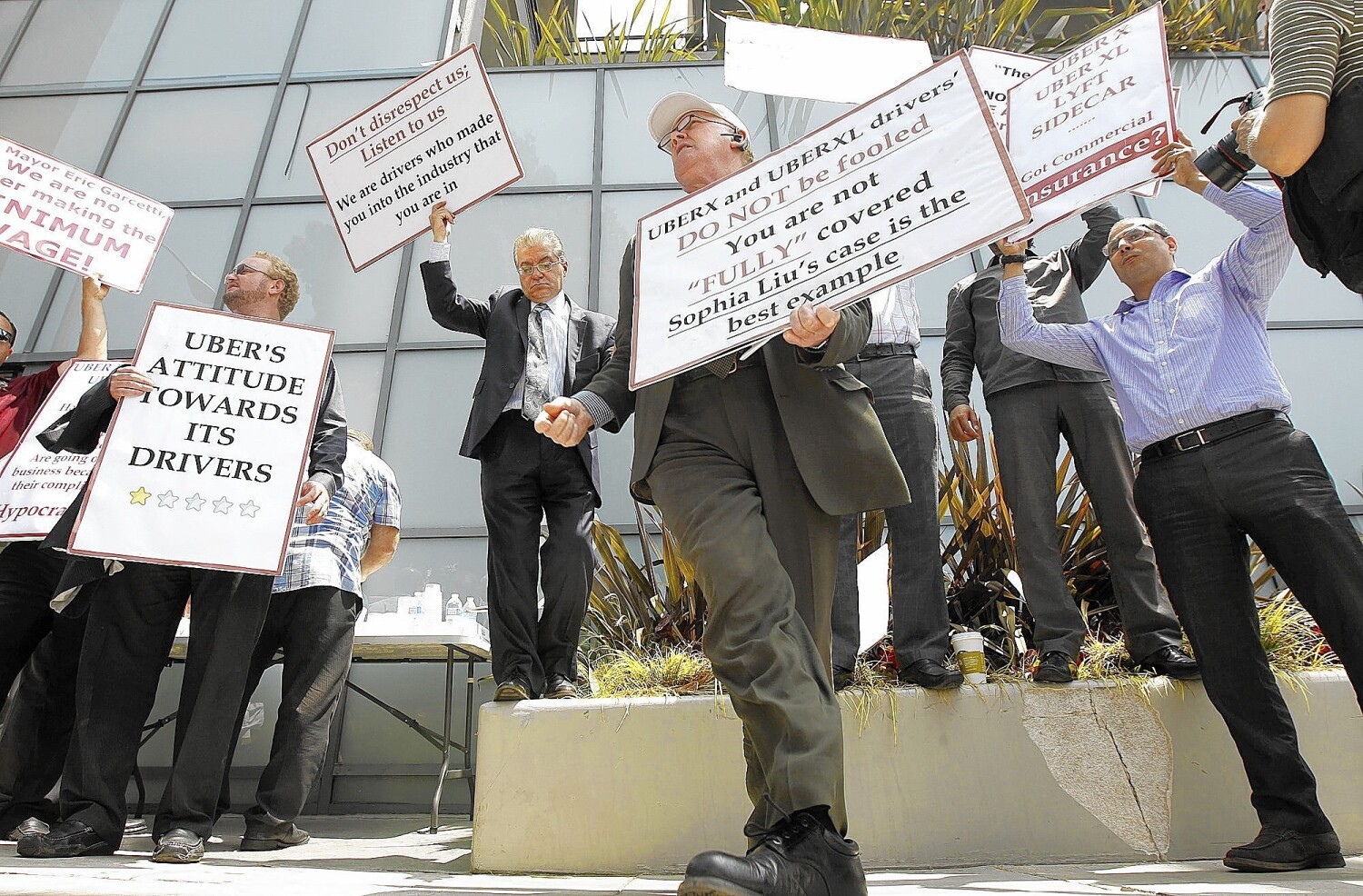 A coalition of about 50 labor groups is asking congressional leaders to reject Uber Chief Executive Dara Khosrowshahi’s proposal for a new legal category that would allow the company to keep treating its workers as independent contractors while affording them partial employee benefits.

In a letter sent Wednesday, the organizations — which include the National Employment Law Project, AFL-CIO, Legal Aid Society, Rideshare Drivers United and Gig Workers Rising — argue these workers have been misclassified as contractors and the resulting lack of benefits has left them “uniquely vulnerable” to the coronavirus pandemic. The groups accuse Uber of “exploiting the moment to further strip protections from those on the front lines of the crisis.”

In a March 23 letter to President Trump, Khosrowshahi asked the government to create a new kind of worker designation that would combine the flexibility of being an independent contractor with some of the benefits and protections of being an employee. It’s the same proposal Uber and other on-demand service platform companies are advancing in a California ballot measure that, if approved by voters, would serve as an alternative to a new state labor law that makes it harder to treat workers as contractors.

“Rather than stand up for his employees, Mr. Khosrowshahi is seizing an unprecedented public health crisis to push forward a radical annihilation of our labor laws,” the letter from the labor groups reads. “He is expanding a business model that has undermined the quality of life for Uber drivers and other workers.”

“We believe our laws should protect all workers, not just one type of work — and rather than restricting independent work, we should strengthen the protections and benefits afforded to it,” the statement read. “That’s why we called on the administration and Congress to pass historic new protections for independent workers, and why we continue to advocate for updated laws that permit companies like ours to provide new benefits.”

Labor advocates have argued Uber does not provide as flexible a source of income as the company maintains.

“When you see precarious low-paid individuals who have to work through a pandemic just to make rent and to pay the bills, it really shows the lie in how much economic flexibility workers really have,” Brian Chen, a National Employment Law Project staff attorney, told The Times. “Precarity and poverty are not flexibility.”

Uber and other app-based gig companies have given their workers as much as 14 days of paid sick leave if they are diagnosed with coronavirus or directed by a physician to self-quarantine. However, as The Times previously reported, workers across the gig industry have said it’s difficult to qualify for the sick leave and some have been rejected even after being directed to quarantine.

In the letter, the labor groups applauded Congress for passing a coronavirus relief bill that expands national unemployment insurance to gig workers for the first time. But they said companies such as Uber, not taxpayers, should provide the funds for it. As it stands now, the groups argued, the bill acts as a bailout for the Silicon Valley company and allows Uber and other gig companies to “shirk their responsibility to pay into those unemployment funds,” Chen said.

“The government is essentially going to pick up the unemployment check,” Chen said. “Someone like an Uber driver or a Lyft driver or an Instacart shopper who really perform work that is central to a company’s business and they are working to build that company’s business and they are working under the direction of that company, they are employees and it is the employer who should be paying their fair share into unemployment.”

In an accompanying letter to Congress, Sanjukta Paul, an assistant law professor at Wayne State University, and Marshall Steinbaum, an assistant economics professor at the University of Utah, wrote that if the federal government pays for Uber and Lyft drivers’ unemployment insurance it could incentivize “states to side with the platforms on employment status, since doing so unlocks funds they would otherwise have to collect from the platforms.”

To that end, the professors said that if the companies are not mandated to pay into a state’s unemployment funds as part of the stimulus act, they should be required to commit to reclassifying the workers as employees in exchange for the federal “bailout.”

In California, where Uber and Lyft drivers argue Assembly Bill 5 entitles them to employee rights, members of labor group Rideshare Drivers United have been filing unemployment claims with the Employment Development Department. California Labor Secretary Julie Su encouraged contractors to apply for unemployment insurance, tweeting a promise to “figure out whether or not you’re misclassified, and determine if you’re owed benefits.”

Nicole Moore, an organizer with the group and a Los Angeles ride-share driver, said that some workers have been told they’ll receive nothing in unemployment because the companies have not shared information with the EDD about driver income. Drivers then have to appeal, provide their 1099 tax forms, and argue they have been misclassified as contractors.

“It takes EDD awhile to figure out how much money we really should earn in unemployment,” Moore said. “I know some drivers who have 58 cents left in their bank accounts applied for unemployment insurance three weeks ago, and they still don’t have a benefit.”